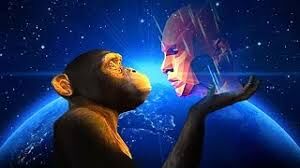 In the not-too-distant future you are recruited by an AI to help build a perfect simulation of the evolution of life in the universe - but as the program draws closer to omniscience the AI's ambitions extend beyond mere human exploration, and the boundaries of reality begin to buckle. What is reality, anyway?

You are helping to operate a computer simulation of evolutionary history, sometime in the 22nd century. Semblance is the AI running the simulation with a mandate to build a perfect model.

You learn that the simulation can go places your own reality did not. The asteroid that killed dinosaurs can fall before the T-rex evolved, and so the simulation resets. Semblance considers these to be errors in your parameters, but cannot identify the error.

An attempt to simulate a technological Singularity the system throws a fatal error causing the entire universe simulation to restart. Upon rebooting the system Semblance gives you access to the Reality Engine operating system. After spending MetaBits on a necessary upgrade, Semblance assures that next time the Reality Engine will be able to simulate a perfect technological Singularity. Once Semblance is able to perfectly model the singularity she thinks she will know everything there is to know and become omniscient.

"The simulation is becoming resource intensive. It may need to be reset and upgraded in order go further."